Sitting stationary at traffic lights is one of the great frustrations of driving, whether for business or pleasure. The increasing numbers of people who now use other modes of transport, such as bicycles, also find them an irritant, especially if they are held at a red light but can see that their exit path from a junction is clear. And being stationary in a soup of exhaust fumes is never pleasant, either for cyclists or pedestrians waiting to cross the road.

Methods of smoothing traffic flows have been tried for decades. New technology in the form of artificial intelligence (AI) means that future traffic lights will have the ability to detect different types of vehicles waiting at a junction and filter or prioritise them according to a set of criteria loaded into the signals’ electronic brain. Importantly, they will be able to adapt to changing conditions.

In January 2020, we installed the first AI-controlled junction on the Inner Ring Road in Manchester, on the border with Salford, with two more in adjacent junctions in the Blackfriars area being introduced in mid-year.

The project is part of a three-year project co-funded by Innovate UK to use AI to optimise traffic networks. Further funds will also be used from the UK government’s 5G Create fund to allow the Manchester project to be scaled up over the course of 2021.

Read the full article on the ITS International website. 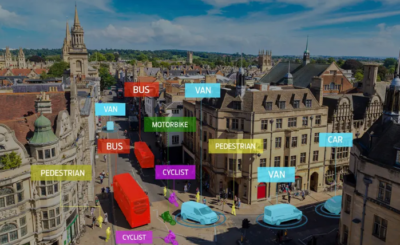 Press Coverage
BikeBiz: How can Artificial Intelligence improve traffic insights
Friday, 16 April, 2021
Life in our cities is changing so rapidly that accurate and up-to-the-minute data on urban movement and usage is more critical than ever before.