Slower speeds not only save lives but can transform how roads are used and shared. 20mph trials can create safer roads for pedestrians and cyclists, encouraging sustainable transport, reducing emissions and improving air quality for all.

With a growing number of councils trialling 20mph zones across the UK, measuring impact beyond speed compliance is becoming more important.

Effective evaluations of 20mph trials should capture a range of data over extended periods, including data on modal split, movement patterns, journey times and near miss events.

These comprehensive datasets can help to better understand what reduced vehicle speeds mean for the road network as a whole and its local communities.

This blog looks at how Kent County Council used VivaCity sensors to monitor the impact of 20mph trials in Tonbridge and Faversham in 2021 and to inform new permanent speed limits.

A trial 20mph speed limit was introduced between September 2020 and March 2022.

The trial was closely monitored and following an in-depth evaluation report, the council decided to make some of the speed limits permanent.

You can read more about the council’s decisions here.

An extensive range of datasets was used to evaluate the 20mph trial scheme.

A total of 13 VivaCity sensors were installed on main routes in/out of the town centres in January 2021, four months into the trials.

An independent evaluation found a good correlation between data collected by the ATCs and VivaCity sensors. In addition to quantitative data, the council analysed consultation responses and commissioned behavioural surveys.

Average speeds reduced across both towns.

An independent evaluation found reduced speeds in both towns after the introduction of new speed limits.

There appeared to be better compliance with the new 20 mph trial speed limits in Faversham.

Following the independent evaluation and a public consultation, Kent County Council decided to bring some roads* in Tonbridge back to 30mph but make the 20mph speed limit permanent on all other roads in Tonbridge and Faversham.

Using continuous data collected by the VivaCity sensors since January 2021, the council is able to continue to monitor speed at different sites in the two towns after the trial has finished.

Latest data from June 2022 suggests that most average speeds align with the new permanent speed limits.

When analysing speed averages, the 85th percentile speeds are considered to be closer to free flow speeds as they account for people slowing down to park or for other reasons.

The sensor is located on the road that leads into the town centre surrounded mostly by fields and industrial areas. Residential areas and a primary school are 0.1 miles away, but there are very few pedestrians recorded at the site.

As expected, average speeds are higher during the evening and night.

Impact of schools on speed levels

Whitstable Road records the lowest average and 85th percentile speeds of the sensors in Faversham.

The sensor is located next to Faversham Recreation Ground and near streets leading to St Mary of Charity Primary School and Queen Elizabeth’s Grammar School.

As expected, average speeds drop during morning and afternoon peaks when traffic and pedestrian volumes are higher. Pedestrian counts peak during 8-9am in line with school opening times.

A closer look at the morning rush hour between 8-9am shows a consistent drop in speeds during weekdays. However, Mondays and Fridays see higher average speeds than other weekdays despite similar motorised traffic and pedestrian counts.

VivaCity sensors have supported Kent council’s decision to make most 20mph zones in Tonbridge and Faversham permanent, by providing accurate and continuous data on traffic flows and speeds for motorised and non-motorised road users.

Latest VivaCity data has shown that most average speeds align with the new permanent speed limits, but also how speeds differ by road types, times of day and road users. For example, higher volumes of pedestrians correlated with lower speeds around schools at peak drop-off and pick-up times.

As VivaCity sensors were installed later into the trials, their data could not be compared against a baseline. However, since their installation they have proven to be an extremely powerful traffic monitoring solution, equipping authorities with an extensive range of datasets that capture not only vehicles, but pedestrians, cyclists, and e-scooters, with market-leading accuracy, making other data sources obsolete.

Read more in the full evaluation report available on the council’s consultation page.

Please note that speeds recorded by ATC and VivaCity sensors can vary slightly so should not be compared like for like. The independent evaluation report provides further detail on the different methods used and how they compare. 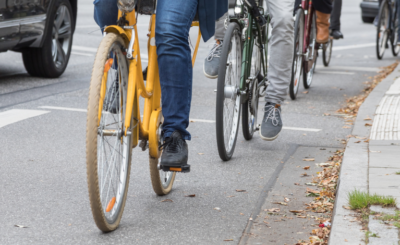 Case Studies
Bristol is Using VivaCity Sensors to Monitor Cycling Trends
Monday, 6 June, 2022
Life in our cities is changing so rapidly that accurate and up-to-the-minute data on urban movement and usage is more critical than ever before.